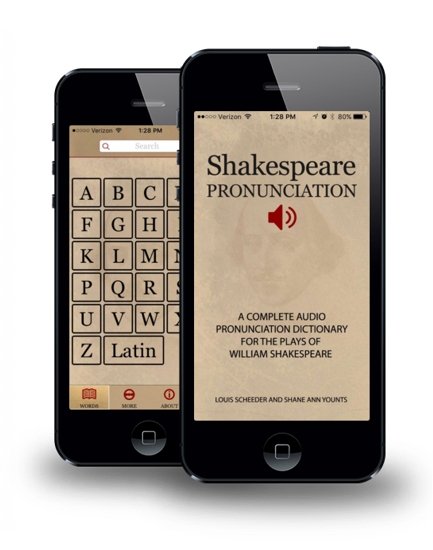 While listening to the Audio Shakespeare Pronunciation App one might ask: Why are correct pronunciations in Shakespeare important? The primary reason is consistency. All of the characters inhabiting the world of the play should be consistent. For example, everyone says roh-SIL-yuhn for the Countess in All’s Well that Ends Well so we know that they all live in the same world. All of the characters in Coriolanus say vuh-LUHM-nee-uh for Volumnia so again, we know the characters are in the same world. If the audience heard a variety of pronunciations for a character, they might be wondering why everyone was pronouncing it differently. We want the audience to be absorbed in the play and not wondering about pronunciations.

Before our book “All the Words on Stage, a Complete Pronunciation Dictionary for the Plays of William Shakespeare”, voice/text coaches used to call each other when working on a production. “How do you pronounce this character?”; “What have you used in the past?”; “What have you heard in other productions?”; “How do you scan this line?”; “Does it change the pronunciation if you scan the line?”

We needed a Shakespeare Pronunciation Dictionary to help us to coach our shows. At that time, the only books that were available were Helge Kokeritz’s “Shakespeare’s Names” and Theodora Irvine’s “How to Pronounce the Names in Shakespeare”. Both books gave only character names and did not include any of the other words. The Kokeritz book was based on English pronunciation with occasional American variants. The Audio Shakespeare Pronunciation App is based on American vowel sounds. In addition to character names, it includes all of the unusual words. There is also a Latin section.

Many of the suggested pronunciations in the Audio Shakespeare Pronunciation App are based on Shakespeare’s use of iambic pentameter which can change the stress of a syllable and also the vowel sound. These variants help the actor to speak a living, breathing language instead of just reciting the written text.